Organization of the cerebral cortex

The cerebral cortex, an extensive sheet of gray matter at the most superficial part of the cerebral hemispheres, is involved in conscious sensory, cognitive, and motor processes. The emergence of the six-layered neocortex, phylogenetically the most recent division of the cerebral cortex, is thought to be a key advance in mammalian evolution and higher order brain function. The neocortex is organized, cytoarchitectonically and functionally, into six horizontal laminae, layer (L) 1 to L6, and numerous tangential areas, broadly classified as sensory, motor, or association. Neocortical neuronal identity and connectivity exhibit considerable laminar and areal dependence that is well conserved among mammalian species (Figure 1), suggesting that the establishment of this complex neocortical organization is likely to be critical to neocortical function. Accordingly, the incorrect acquisition of organization and circuitry during neocortical development may contribute to cognitive impairments and increased susceptibility to psychiatric and neurological disorders. 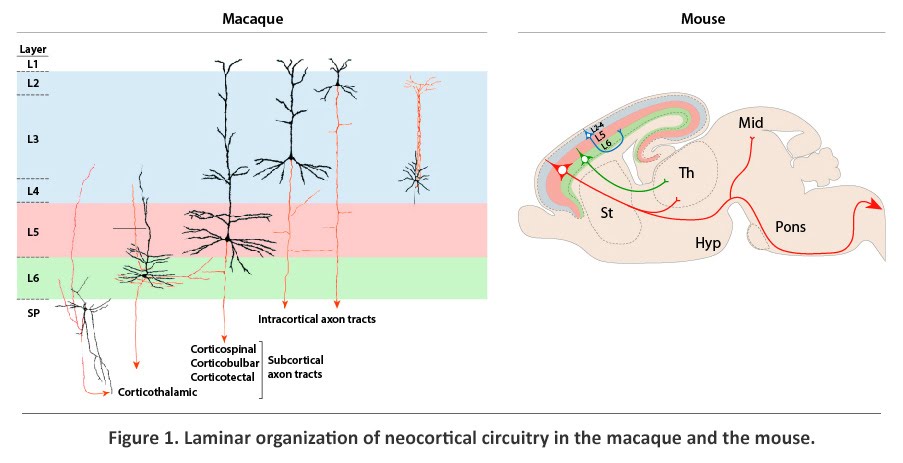 Present within each horizontal layer of the neocortex is a unique complement of glutamatergic excitatory projection (pyramidal) neurons and GABAergic inhibitory interneurons. The projection neurons, which account for approximately 80% of all neocortical neurons, extend long axonal projections (Figure 1). Intracortical projections connect proximal and distal regions of the neocortex, whereas corticofugal projections, which constitute the neocortical output system, connect the neocortex with subcortical brain structures. Projection neurons, which develop post-synaptic specializations known as dendritic spines, are also the largest input system, being the major target of afferents from other structures of the brain. Positioned within L2-L6, projection neurons exhibit layer- and subtype-dependent differences in molecular identity and axonal projections. Corticofugal axonal projections originate strictly from the deep layers (L5 and L6) and the subplate (SP), a neocortical structure that contains early-born neurons positioned between L6 and white matter (MW). Axons that innervate the thalamus, which form the corticothalamic tract, originate largely from SP and L6, whereas axons that project subcerebrally, including the corticotectal, corticobulbar, and corticospinal tracts, arise exclusively from L5. Projection neurons positioned in the upper layers (L2-L4), in contrast, project only within the cortex, either intrahemispherically or contralaterally. The corpus callosum, which is formed by contralateral intracortical axons, enables communication between the two cerebral hemispheres.

Diverse subtypes of neocortical projection neurons are generated from terminal divisions that take place within the germinal zones of the dorsal telencephalon, namely the ventricular and subventricular zones (VZ and SVZ) and undergo radial migration to their destination in the mantle layers of the neocortex (Figure 2). Prior to the onset of neurogenesis, the dorsal telencephalic VZ is composed of proliferating neuroepithelial progenitors (NPs), which primarily undergo symmetric divisions, generating two daughter cells that would re-enter the cell cycle and thus exponentially expand the pool of NPs. At the onset of neurogenesis, around embryonic day (E) 10.5 in the mouse, some NPs assume radial glial morphology to become radial glial cells (RGCs). RGCs function as progenitors for projection neurons both directly, by undergoing neurogenic divisions in the VZ, and indirectly, by giving rise to intermediate progenitors (IPs), which migrate away from the VZ and undergo further neurogenic divisions in the SVZ. In addition, RGCs provide a scaffold for the radial migration of their neuronal progeny into the mantle layers. 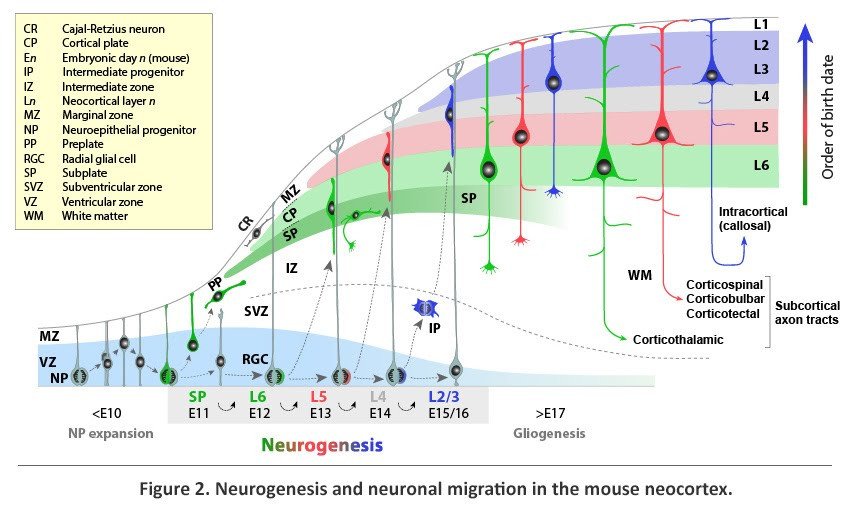 The earliest neocortical neurons form a band of cells, termed the preplate (PP), at the superficial part of the cerebral wall. The first projection neurons, generated around E11.5 in the mouse, migrate radially away from the VZ and through the IZ before settling as a layer within the PP to form the nascent cortical plate (CP), from which L2-L6 of the neocortex would eventually emerge. With the incoming CP neurons, the PP is split into two layers; the superficial marginal zone (MZ), which forms L1 of the postnatal cortex, and the deeper SP, which is positioned below L6. The early-born neurons of the MZ and SP are the first to mature morphologically and synaptically, form pioneering connections, and play a key role in the subsequent migration of CP neurons and assembly of cortical input and output circuits.

From E11.5 to E16.5 in the mouse, neurogenesis progresses to produce, in a sequential manner, diverse subtypes of neocortical projection neurons. Because newly generated neurons migrate past older, post-migratory neurons to settle within the most superficial portion of the CP, projection neurons are added to the CP following an inside-first, outside-last (L6 to L2) sequence. At the end of radial migration, newly post-migratory neurons undergo molecular and morphological differentiation into diverse neuronal subtypes and form neural circuits appropriate of their layer location.

The sequential nature of neocortical neurogenesis from related progenitor lineages directly links neuronal birth-date and location of terminal division to neuronal position, identity, and axonal connectivity. During early cortical neurogenesis (~E11.5-E13.5 in the mouse), the majority of neurons are generated directly via asymmetric neurogenic divisions in the VZ. These early-born neurons are mostly destined for the deep neocortical layers that comprise the corticofugal output of the neocortex. Later in neurogenesis (~E14.5-E16.5), many neurons are derived indirectly through divisions of IPs in the SVZ. These late-born neurons are mostly destined for the upper layers that form intracortical connections and extensively innervate the corpus callosum. IPs are thought to contribute a significant number of cortical projection neurons and may have played a role in the relatively recent evolutionary increases in upper-layer intracortical projections in the primates. Consistent with this possibility, many primates, and a number of other mammals with large brains, have a specialized zone containing additional IPs known as the outer SVZ (oSVZ).

The assembly of neocortical layers and neuronal circuits requires exquisite regulation of many developmental processes. The functional segregation of neocortical circuitry into horizontal layers and tangential areas facilitates the integration and processing of inputs and the generation of appropriate outputs. Importantly, alterations to neocortical organization can contribute to psychiatric and neurological disorders. Defects in neurogenesis and neuronal migration can lead to severe brain malformations in humans, including microcephaly, lissencephaly, and gyration disorders. Additionally, more subtle alterations to neocortical circuitry are thought to contribute to neurodevelopmental disorders such as autism and schizophrenia. Therefore, in addition to fundamental insights, studies of neocortical development may also illuminate the biological underpinnings of developmental brain disorders.